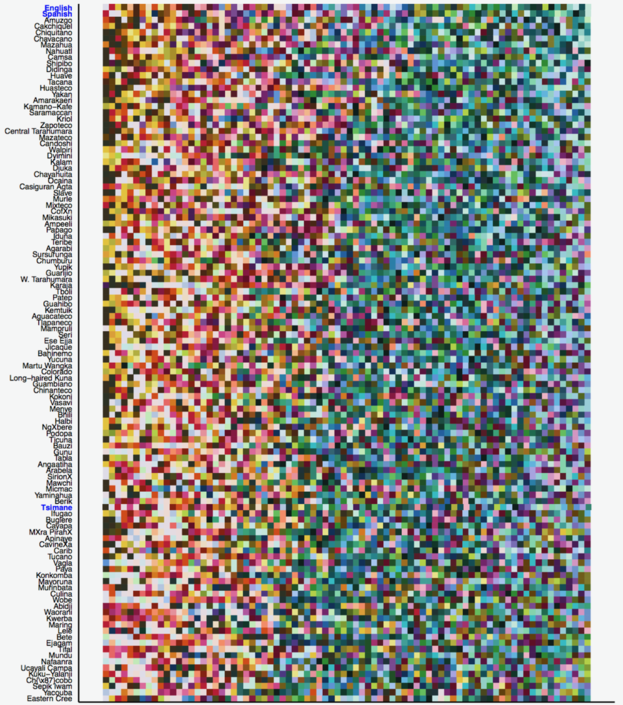 The image shows 80 Munsell color chips rank-ordered left-to-right by how effectively the color of the chip is communicated, using the words in a particular language. Each row shows data for a given language, including the 110 non-industrialized languages of the World Color Survey, plus English, Bolivian-Spanish, and Tsimane’ (data that our lab gathered). The 80 color chips were selected so as to be maximally saturated and evenly spaced across the Munsell color space. The key result is that across all languages, regardless of the sophistication of their color-naming systems, warm colors (e.g., red, orange, yellow, brown) are communicated more efficiently than cool colors (e.g., blue, green), as evidenced by the concentration of warm colors in the left side of the image.

Finding explanations for the observed variation in human languages is the primary goal of linguistics, and promises to shed light on the nature of human cognition. One particularly attractive set of explanations is functional in nature, holding that language universals are grounded in the known properties of human information processing. The idea is that lexicons and grammars of languages have evolved so that language users can communicate using words and sentences that are relatively easy to produce and comprehend.  In this talk, I summarize results from an exploration of color words cross linguistically, from an information-processing point of view.  First, I show that word lengths are optimized on average according to predictability in context, as would be expected under an information theoretic analysis. And second, I apply a simple information theory analysis to the language for color. The number of color terms varies drastically across languages. Yet despite these differences, certain terms (e.g., red) are prevalent, which has been attributed to perceptual salience. Our work provides evidence for an alternative hypothesis: The use of color terms depends on communicative needs. Across languages, from the hunter-gatherer Tsimane’ people of the Amazon to students in Boston, warm colors are communicated more efficiently than cool colors. This cross-linguistic pattern reflects the color statistics of the world: Objects (what we talk about) are typically warm-colored, and backgrounds are cool-colored. Communicative needs also explain why the number of color terms varies across languages: Cultures vary in how useful color is. Industrialization, which creates objects distinguishable solely based on color, increases color usefulness.

Members of the Language of Color study group can see each others full contact details. They also get priviledged access to publication and data sets.

It's free, get in touch.